Home About the Faculty Tutors 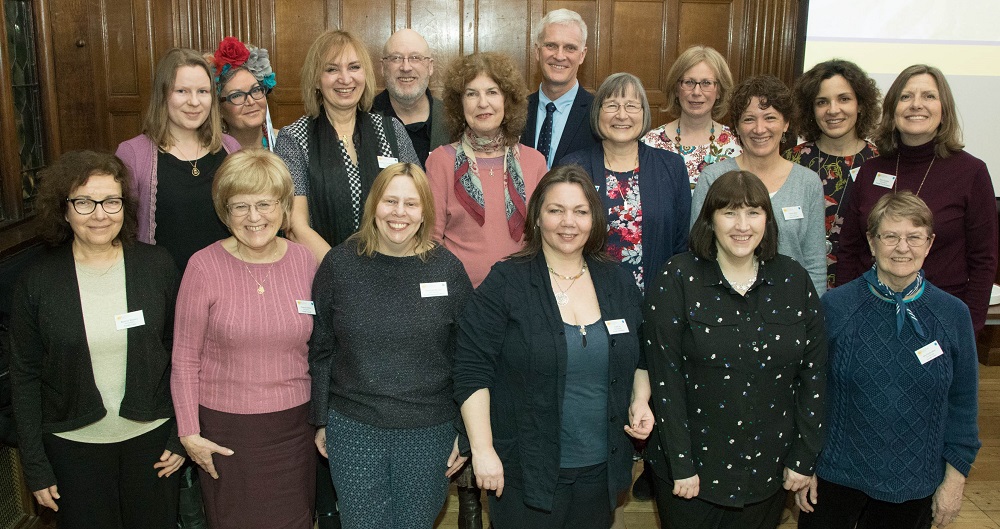 Faculty Tutors provide instruction and support for students through a number of methods. Some tutors dedicate their teaching to London Classes, a growing number are now leading Online Classes, many teach at Summer School, and nearly all tutors offer guidance through Distance Learning via Email. Tutors for the Faculty reside in six different countries, and they interact with students globally.

Toby’s interest in astrology grew from his father’s love of the night sky, his sister’s ability to quote from Linda Goodman’s Sun Signs, and his own appreciation for cycles and patterns in music and mathematics. Originally a school teacher by trade, Toby enrolled with the Faculty in 1997, earning the Faculty Scholarship for his Certificate exam results the following year. He explored other avenues of astrological study for a while, then returned to the Faculty in 2010, earning the Diploma by 2013. Toby runs an astrology practice in Vancouver BC, Canada.

Beatrice was born in France but lived in the Netherlands since her first nodal return in the 1970's. While working as a social worker, studying the influences of cultural background and language upon human consciousness, she took classes with various astrologers, delved into different spiritual. approaches, including esoteric astrology and became a student of the Ancient Wisdom since. She finally graduated from the Faculty of Astrological Studies where she has been a distance learning tutor since 2007. She owns her astrological practice in the Netherlands, gives consultations, teaches and lectures at home and abroad in Dutch or French.  Watch Beatrice's Video

Frances began studying astrology in 1987 with the Irish Astrological Association. She has been practising and teaching since 1989. In 2007, Frances was awarded an MA in Cultural Astronomy and Astrology by Bath Spa University and, in 2016, a PhD from the University of Wales Trinity Saint David. She is currently the Lead Tutor on the Sky & Psyche module at the Sophia Centre for the Study of Cosmology in Culture. Watch Frances's Video

Darby has been an astrologer for more than half her life and is engaged in many layers of the astrological community. She taught at the Centre for Psychological Astrology from 1988 and lectures and teaches internationally. She has written several books: Astrology (with Lindsay Radermacher); The Astrological Moon; Water and Fire; and Earth and Air. She also co-authored The Mars Quartet with Lynn Bell, Liz Greene and Melanie Reinhart. Darby was awarded the MA in Cultural Astronomy and Astrology at Bath Spa University in 2006. She received the Charles Harvey Award in 2013. Her consultation practice is at the heart of her working life as an astrologer. Watch Darby's Video

Cat began studying astrology in London in 1984 and was awarded the Faculty Diploma in 1996 and the MA in Cultural Astronomy and Astrology from Bath Spa University in 2007. Cat is the President and Head Tutor of the Faculty and has taught with the school since 2006. Her interests in healing, Jungian and transpersonal psychology, goddess spirituality and the Western Mysteries inform her approach to astrology including how we work psychologically, experientially and ritually with symbols and myth. She practices in London, loves teaching and over time has come to view her work with charts as a spiritual practice. Watch Cat's Video

Penny gained her Diploma and the Margaret Hone Award in 2001, having studied astrology for many years while working in the National Health Service. She runs a small practice in South London, is a Distance Learning Tutor and has taught at Summer School. She especially enjoys working with students from different countries and cultures. Watch Penny's Video

Sue graduated in Psychosynthesis pyschotherapy in 1987. She joined the Faculty as a tutor at the London Classes in 1999 and served as a Faculty Council Member for six years. She works with and teaches the symbolism and meaning of the Tarot as well as having a private astrological and counselling practice. Watch Sue's Video

Kim has a background in writing and cooking and began studying astrology seriously in the late 80’s. She went on to teach classes first in Adult Ed and then for the Faculty at Foundation and Diploma level. Kim has a particular enthusiasm for introducing astrology to beginners. Alongside her consultation work, she teaches private students, lectures for the LSA and is also a trained Independent Funeral Celebrant. Watch Kim's Video

Mark Fountain combines a small astrological practice with the teaching of English as a Foreign Language which he has been doing since 1986. He became interested in astrology when he was 14 years old, embarking on a long journey which finally led to him gaining his Diploma in 1998. Originally from Gloucestershire, Mark now lives and works in the university city of Cambridge, where he relishes the chance to meet people from a wide range of cultural backgrounds on a daily basis. His other interests include History, Psychology, Art and Politics. Watch Mark's Video

Stevi's working life has been focused on communications. After two years as a mathematics teacher she worked in sales in the IT industry and then for 20 years was a sales, negotiation and interpersonal skills trainer working with people in business. Stevi's interest in astrology developed from 2003 when she began studying with the Faculty.  She gained her Diploma in 2010 and has  been a Faculty tutor since 2011, she also runs an astrological practice. Stevi gained her MA in Cultural Astronomy and Astrology from the University of Wales, Trinity Saint David, in 2016. Watch Stevi's Video

Inspired by a heart felt connection to the starry heavens Lindsay’s passion for astrology gained her the Faculty Diploma in 2012. Fascinated by the encapsulation of the divine encoded within the symbolism of astrology her particular interests focus on the creation myths,  sacred landscapes, and heart-centred philosophy. She holds the M.A. in Myth, Cosmology and the Sacred from Canterbury Christ Church University. Lindsay has her practice in West Sussex. Watch Lindsay's Video

Martin Lipson won the Thomas McArthur award in 1998 and the Margaret Hone award in 2003. He gained his Diploma in 2004. Martin maintains a private practice near Kingston Ontario Canada. Watch Martin's Video

Alejo was born in Argentina but moved to Europe at the age of 23. Further journeys set him on a quest to find some kind of language that could describe people’s diverse lives and inner world. He gained a Bachelor’s Degree on Psychology and the Faculty’s Diploma. In the meantime, he studied myths and observed some other spiritual practices. He is particularly interested in finding sacred languages and techniques that could help us develop a dialogue with the Divine. He believes that once you learn Astrology, you can never be alone for the planets will speak and guide you. He holds his astrological practice in Spain but travels frequently to other parts of Europe (and sometimes USA and Argentina) to do lectures, workshops or consultancy work. He loves sharing his passion for astrology with others.

Deborah runs her own astrological practice based in the East Midlands and specialises in using astrology for personal development work, using experiential techniques with astrology to assist clients in moving forward towards their goals. She is keenly interested in the Western Mystery Tradition, medieval literature and mythologies and their links with astrology. Deborah is currently furthering her studies in horary and electional astrology. Watch Deborah's Video

Born in 1961, Gloria started to study astrology formally in 1991 with the Faculty. She has also studied esoteric astrology with Alan Oken and Hermetic Symbology at the Centre d'Estudis de Simbologia de Barcelona. She obtained the Faculty's Certificate in 1993 and its Diploma in 2002. Gloria works as a teacher, consultant astrologer and Faculty tutor since she obtained her Diploma. She combines this work with her astro-feng shui practice and research in her fields of interest: psychological astrology and local space techniques. Watch Glòria's Video

Liz was already fascinated by the night sky before discovering astrology at the age of ten. In her teens she taught herself to draw up her own chart and those of her friends. She continued her astrological journey with the Faculty, obtaining her Diploma in 1992. Subsequently she has gained qualifications in horary astrology and counselling. She particularly enjoys being part of the astrological community; sharing its world view and rich symbolic language with fellow astrologers at the Faculty Summer School, AA Conference and other events. She is one of the organisers of the Oxford Astrology Group.

Rosemary has had a passion for astrology since early childhood, and has worked as an astrologer since gaining her Diploma in 2012. Rosemary has an arts background, and the imaginative power of astrological symbolism appeals to her creative nature. She finds in astrology a language that can track the deep archetypal patterns that give context and meaning to our human experience. Rosemary’s other interests include the reconstructed practices of the native spiritual traditions of the Norse and Germanic tribes, and the sacred sites of Glastonbury where she lives and works. She is currently studying for the MA in Myth, Cosmology and the Sacred at Canterbury Christ Church University.

Lisa began studying astrology twenty years ago, a journey which led to finally gaining the Faculty diploma in 2018. She runs an astrological practice in north London, in between wrangling a young family. Her special interest is astrology as a spiritual practice and she works deeply with the symbolism of both astrology and the tarot.

Carole has been a Faculty tutor and a professional astrologer since she gained her Diploma in 2000. She was organiser of the London Classes and Summer School for many years and is currently Director of Studies. She manages the Faculty's course material and course development, recently pioneering the introduction of Online Classes. In 2012, she was made a Fellow of the Faculty for her extensive contribution to the life of the school. She has an interest in complementary medicine and worked for 5 years as a professional reflexologist for the Complementary Health Trust in London. University. She holds an MA in Myth, Cosmology & the Sacred from Canterbury Christ Church University and is a tutor on the Sophia MA in Cultural Astronomy & Astrology at the University of Wales, Trinity Saint David. Watch Carole's Video

Mónica lives in Portugal, and started to learn astrology in 1996. In 2007 she began her studies with the Faculty, obtaining the Faculty’s Certificate in 2010 and its Diploma in 2015. For her, Astrology is the most profound and powerful tool for personal development and conscious management of our energy and time on Earth. In 2019, she obtained an international certification in coaching by International Coach Federation, and she is currently introducing Coaching in her Astrological practice. Mónica worked in the healthcare IT industry for 20 years, first as a software engineer, and then as head of quality & human resources.  She holds a Licenciatura (roughly equivalent to BSc+MSc) in Informatics from the University of Lisbon.

Dragana lives in Belgium and Serbia, and has been working as a professional astrologer since 1990. She gives courses, workshops and lectures and works with clients in English, Dutch, and Serbian. Besides her astrological lectures, she also lectures on the cosmological elements in medieval Serbian iconography. Dragana also has a Diploma from the Faculty of Natural Sciences and Mathematics (Chemistry) and an MA in Cultural Astronomy and Astrology. Watch Dragana's Video