This article (an extract form the Faculty’s course material) aims to provide a brief introduction both to the Foundation course and the subject of astrology itself, touching on the historical, social, cultural and philosophical frameworks that underpin it.

Since earliest times, it is clear that the sky has offered humankind illumination, be it literal or metaphorical, practical or spiritual. As a species, we seem wonderfully 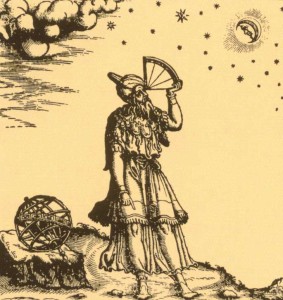 endowed with the ability to locate, decipher and create meaning from the natural world around us. Both a discipline and an art, astrology is a rich and potent example of this skill, a vast and ancient practice which continues to expand and evolve, has numerous different approaches and applications and reliably provides techniques and tools with which to navigate and shape our modern lives.

In trying to grasp the scope of the subject, one can usefully employ analogies such as mirror, map, seed or language, as we shall see. Above all, learning Astrology is a hugely enriching experience which can deliver valuable self-knowledge, validation and acceptance. In this fragmented, fast-paced and often fractured 21st century, astrology can help us reconnect to our wholeness as well as opening our minds and eyes to the larger patterns at work, within which we (and every other living thing) belong.

Seeing clients for personal readings and running a consultation practice is just one way of working with astrology. Other possibilities include writing and research, astro-drama and experiential work, or specialisations such as medical, financial, karmic and spiritual astrology. Traditional astrology flourishes alongside Modern. Electional(1) , Predictive(2)  and Horary(3) are all different forms of the art, as are Astro-cartography , Synastry and Mundane astrology. Some authors of fiction use astrological symbolism to help flesh out their characters, just as some artists and musicians use the planets and signs as inspiration for their creativity. The internet has of course provided an unlimited platform for all kinds of astrology, with a proliferation of websites, forums, blogs and archives dedicated to any number of astrological ideas.

From an historical perspective, originally there was no distinction made between the terms astrology and astronomy, indeed in Latin, astrologia was the standard word for the study of the stars until Seneca (c. 4BC-65AD) introduced the Greek term astronomia. Up until the 17th century, “When(ever) the two terms first co-existed in English, they were used interchangeably, and in fact when a distinction first began to be recognised between the two, it was the opposite of that now accepted: astrology meant simply ‘observation’, whereas astronomy signified ‘divination’.” (Bloomsbury Reference Dictionary of Word Origins). In current usage, astronomy (and more recently, astrophysics) denotes the scientific observations of celestial phenomena, whereas astrology concerns the correlation of the geocentric positions of the planets, Sun and Moon to the understanding of human experience, character and circumstance.

With its roots in pre-history, what we understand as Western Astrology (as distinct from Vedic or Chinese Astrology, for example) has been expanded, refined and shaped at different times by Egyptian, Greek and Roman cultures, with Arabic astrologers keeping the tradition vitally alive throughout the Dark Ages. After something of a high point in the 16th and early 17th centuries, when luminaries such as Kepler, Galileo and Lilly were practitioners, the changing world view towards the end of the 17th century led gradually to a rejection of astrology’s previously respected wisdom in the West. In more recent times, the Theosophical movement and the insights of depth psychology made vital contributions to the subject’s redefinition and growth through the 20th Century. European, Australasian and North American practitioners, writers and teachers have all played their part in expanding and deepening the subject.

Since antiquity, maxims such as ‘as above, so below’ or ‘as without, so within’ have carried the sense of the relationship between the great and the small. Put simply, our macro – the solar system – can function as a looking-glass for the micro – our collective and individual lives. The study of astrology is a complex and imaginative system of thought that recognises the solar system as a mirror within which the affairs of humans are reflected. Just as with any mirror, we are able to look into it from our individual perspective and see an accurate reflection therein. Part of what we can see in our starry heavens is the outline of our own lives.

A horoscope (from the Greek hora/hour and skopos/watching – literally ‘hour watching’) is a flat diagram of the positions of the Sun, Moon and planets from a specific 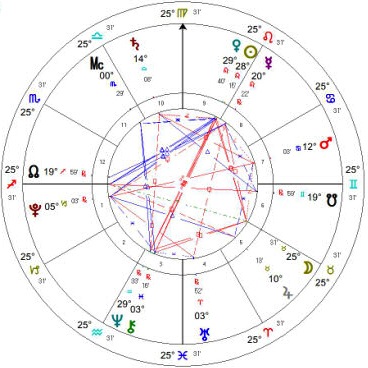 geographical and temporal perspective. It can be likened to a map of the soul or a blueprint for our lives and contains the raw material from which myriad possibilities may grow. Just as each seed holds the potential of the fully grown plant, so each chart holds the promise of a fully-matured life, though in both cases the surrounding environment and conditions, factors large and small, many outside of any direct control (including a certain amount of chance or luck), will contribute to this growth, or lack of it. The original map of the birth chart, based upon the date, time and place of our nativity, gives us a vivid and detailed picture of our terrain and crucially describes inner circumstances as much as outer, but the experience of inhabiting and negotiating this specific topography is about living and breathing in that terrain, rather than looking at the map. Being able to read a person’s chart does not mean we can claim definitively to ‘know’ anything about that particular individual, nor exactly how they will personally manifest the patterns shown. The larger context of the era in which one lives, the smaller context of the society, community and background in which one is raised, the specific conditioning one is subject to and the choices one makes of one’s own free will all play their vital (often unspoken) parts. Indeed, as Dennis Elwell points out in his book Cosmic Loom , about some of the distinctions that we as humans seem to consider fundamental, such as female/male or good/evil, the cosmic language says nothing at all. The birth chart holds a wealth of possibilities and offers itself to our imagination, our inclination to question, explore, discover and decode. There is no such thing as a good or bad chart – that is a purely human judgement or distinction, not a cosmic one. The art and the challenge of natal interpretation is in taking all the tightly-bound material and teasing it into strands that can then be woven into the colourful, vivid and complex cloth of a real life, full of potential and paradox.

Another useful metaphor for Astrology is elegantly summed up here by Dane Rudhyar: ‘Astrology is a language. If you understand this language, the sky speaks to you.’ Clearly this language, like any, can be used well or poorly. Nobody entering a serious study of the subject, as you are now doing, can be unaware of the
misapprehension and disparagement that often emerge when astrology comes under discussion. English may be the rich and nuanced language of Shakespeare, Austen, Yeats, Nabokov or Joyce, yet that doesn’t prevent it being widely misused or butchered on a day-to-day basis. In our Modules, our aim is to support you in your acquisition and application of astrological language, to facilitate your understanding of the correct use of its grammar, to assist your fluency and to extend and polish your vocabulary and style. Ultimately, how, when and where you go on to use this language is up to you.