Standing in my driveway, ice chipper in hand, surrounded by chunks of ice and a smooth sheet of yet-unchipped frigidity, I pause to wonder – about Sedna’s tangled hair.   When she gets upset, she rages powerfully, sends storms sweeping across her territory, she cracks ice, making frightening loud bangs and leaving holes in the ground, she shrieks in the wind, and blinds and freezes any mortal who dares to stand up to her.   Her fury this winter has been awesome.   Who will swim down to the depths of the Arctic to comb out her tangled locks and soothe her?   And, perhaps more important, what is making her so angry?    The cause of her anger is not difficult to see; as the Arctic-bordering nations quarrel about who “owns” her territory, and who therefore has the right to go exploring for oil there, and the ice melts and the sea everywhere else rises to engulf small islands, she is threatened with extinction.   Greenpeace is trying to protect her, but Greenpeace is our maverick, and can the healing abilities of Chiron, so young and untried, calm the anguished temper of our Arctic mother?

Sedna is in Taurus, the sign of resources, and in her mythology she is a food-producing and food-providing Goddess.   When her fingers were cut off by her father to ensure his own safety, and she sank to the bottom of the Arctic Ocean, her fingers became all the sea creatures of the northern oceans, the whales, the seals, all the other mammals and the fish.     Although she is unpredictable and overwhelming in strength when she gets angry, she nevertheless provides the food that keeps her people alive.   However when she is raging she cannot do this, so it is important to keep her happy and calm, to keep her hair untangled.   Over the solstice season, many people were unable to enjoy their Christmas feasts because they had no power, sometimes for up to ten days, and meantime all the food in their fridges and freezers melted and had to be thrown out.   In order to help those for whom this loss was a calamity many of the supermarkets, with the help of governments, gave out food vouchers to help replace the missing food.  But there were never enough vouchers for the people lining up (in the unbelievable cold) to get them.  Does this tell us anything? We also experienced the phenomenon of cryoseismic activity. In the middle of the night there is suddenly a heavy bang or thud which wakes us up.  What could that have been?  Perhaps an ice-laden tree has fallen on the roof of the house, or something heavy in the house has fallen over; but no, we eventually discover that the rain which fell heavily in mid-December is turning into ice deep in the ground and this freezing activity causes a minor earthquake which can shake the house.   Banging and crashing around are all Sednaesque activities.

Sedna’s representative in the sky moves in a gentle annual motion of Direct and Retrograde, stationing in the midsummer and midwinter.   From its SD time in midwinter it moves direct until midsummer when it again turns retrograde.   Of course with a travel time around the zodiac of over ten thousand years it does not get very far in a lifetime.   It is now travelling very fast, for Sedna, but even so from its stationary position of 23 Taurus 16 this February 4th, it moves only  36 minutes to its next February station in 2015.   Although we accept that a planet is more potent in its effects when it is moving slowly,  Sedna is so slow that even at its present high speed it is still a “heavy.”

When the present Pluto Uranus cycle started in the mid-sixties at 16 degrees of Virgo, Saturn opposed the conjunction for much of the time, and Sedna was there too, making a semi-square to Saturn and a sesquiquadrate to the Great Conjunction.   Of course we did not know about it then, as Sedna did not come into our consciousness until late in 2003 and we finally had to admit that the Arctic ice is melting.   Now, while we are trying to deal with the challenging energies of the waxing square between Pluto and Uranus, we may not have noticed that Sedna is in the picture again, making a sesquiquadrate to Pluto and a semi-square to Uranus.   But this time, we have to take notice.   We have been shown what Sedna energy can do when we do not pay attention.    We know that we  have to change in many different directions through the explosive energy of Uranus and the slow but inexorable energy of Pluto, but we have a clue from Sedna’s position about what these changes have to be about;  how we deal with or do not deal with our perceived need for resources.

And what about Saturn?  Well, Saturn is in the picture again too.   In the solstice chart* for Dec 21 2013, our new year, Sedna is in the 2nd house of our resources, and it opposes Saturn in the 8th house of joint resources.   How can we miss this message?   At the most obvious level we can read the chart as a challenge to deal with the whole issue of “ours” and “theirs,“ or we can see Sedna as “the resource” on which we  actually depend –  the ocean and particularly in this context the northern ocean –  and the Saturn placement opposing it as the need to recognise that there are limitations on our  resources derived not only from the fact that other folks can claim them too, but also from the by-now- obvious fact that the more we struggle to obtain “more” the more we lose what gives us life and food.  However, let us not look at this chart as though it just applies to us**, it applies to the whole world.   Humankind seems to believe that we don’t have enough of anything, so we have to destroy the parts of the world that keep us healthy and well-fed (such as forests and oceans) so that we can have more of… what?   Things that make us unhealthy generally.   So, inevitably, we will go ahead and drill for oil in the Arctic, and Sedna will rage.

Because the secular New Year is so widely important, and certainly to the countries that border, and claim, the Arctic seas, I also used the chart for the New Moon on January 1 2014, as it seemed to me that it too has significance.   This chart has the Moon, Sun and Pluto and Mercury in the 1st House.   Sedna is in the 5th  (“Look at me”) house, ruled by a retrograde Venus.  It opposes Saturn, and marks the sesquiquadrate to the Moon, Sun, Pluto conjunction, the semi-square to Uranus, and also a quintile to Chiron.   (Perhaps a maverick approach to the whole issue of Arctic exploitation will work after all.)

So what have we learnt from the anger of Sedna over the Solstice season?   Only confirmation that this energy is rightly named.  Exploitation and neglect of her needs, which is what Sedna suffered at the hands of her father and Raven-husband, will be repaid with her terrible anger.   And her anger ends with loss for us, of our resources, and particularly our food.    If her domain is not honoured she will  not feed us. 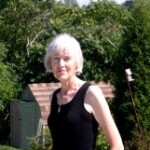 Holly Rogerson is a Diploma Holder who lives Coburg, Ontario.  Holly sees some clients and has run an astrology group from her home for over a decade.  This year she was given a radio programme on her local radio and now has a weekly astrological broadcast.