A few months ago a book was published called ‘Quiet: The power of introverts in a world that can’t stop talking’ i. In it the author, Susan Cain, argues that, in a world which tends to admire and promote extroversion, we have come to undervalue the more introverted qualities of thoughtfulness and quiet contemplation. Cain, a self-confessed introvert (in good company – she lists many famous introverts, such as Gandhi, Rosa Parks, JK Rowling and Eleanor Roosevelt), shows how so many introverts respond by trying to become (or at least appear) extroverted, even when the stress of this brings them unhappiness. 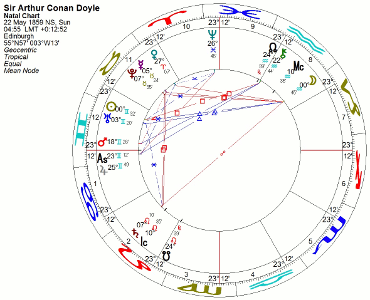 As astrologers, I think we are less inclined than most to make this kind of mistake – to value one characteristic over another. We have the perfect system to tell us why a person might feel or behave the way they do and, most importantly, that these feelings and behaviours are authentic and true. If we think of extroversion, for instance, as arising partly from an abundance of planets in the positive signs and introversion more from an abundance of planets in the negative signs, then it is clear that extroversion is only half the story and that introversion is equally important, valid and powerful. We might then extend this to everything else in the chart – every planet, sign and house – and indeed to anything which reflects the image of the heavens at a given moment, such as an unaspected or retrograde planet, a T-square or a Grand Cross. Astrologers don’t in any way deny the immense challenges inherent in particular placements or configurations, but in general I think we are primarily interested in understanding the archetypal quality of what is before us in the chart, rather than making value judgements about what is ‘good’ or ‘bad’.

One thing which has always struck me about charts is how the same factors which seem to describe the difficulties and challenges of a person’s life also seem to describe their most astounding creative gifts. We might think of the aforementioned Gandhi, with his unaspected Mercury in Scorpio in the 1 st, who was initially crippled with shyness about public speaking – so much so that his career as a barrister almost ground to a halt before it had started – but who then went on to become one of the most powerful orators and a voice not just for his own countrymen but for millions all over the worldii. Or the aforementioned Rosa Parks, with Mars opposite Neptune, who decided one day, in her own quiet, unassuming way, to respond (very politely) to a bus driver who had asked her to make way for a white passenger: ‘Arrest me for sitting on a bus. You may do that’ – and sparked a human rights revolution.iii

The American psychoanalyst Rollo May once said: ‘ Creativity is not merely the innocent spontaneity of our youth and childhood; it must also be married to the passion of the adult human being, which is a passion to live beyond one’s death. If you do not express your own original ideas, if you do not listen to your own being, you will have betrayed yourself’.

I could use any one of thousands of charts to illustrate the idea that creativity can arise from the most difficult-seeming configurations – a quick look at the chart of any writer, musician or artist, for instance, will reflect not only the personal challenges they have faced but also the core qualities of their works, their particular artistic style and the impact of their work on the world, very often in the exact same chart factors. The actor Lee van Cleef (Sun-Mars-Pluto T-square with apex Mars in Aries) was nearly crippled in an alcohol-fuelled car accident, but then went on to be chosen by director Sergio Leone to star in ‘The Good, the Bad and the Ugly’ (in case you don’t know the film, he played ‘the bad’…) and to make, in his own words, a very good living from ‘simply looking mean’iv. Marcel Proust (Neptune rising and square to Sun-Mercury in Cancer in the 3rd, Sun and Mercury also conjunct Jupiter and the IC), shattered by the death of his father and adored mother within two years of each other, withdrew from life into isolation in a sound-proofed flat where he wrote his masterwork ‘A La Recherche du Temps Perdu’ v, a novel about the enigma of memory, much of which was written at night in his cork-lined bedroomvi. Or we can think of the guitarist Jimmy Page (unaspected and retrograde Jupiter in Leo in the 10th, co-ruling the 5th) whose famed excesses of lifestyle and drug use threatened to derail his career but whose band (unwittingly named by Who drummer Keith Moon, when he said that the band would surely ‘sink like a lead zeppelin’ vii) became one of the most successful in history and whose co-written song, ‘Stairway to Heaven’, is one of the best-known rock songs of all time. Like manna from heaven, Page came across his first guitar (aged 12 – that is, at his first Jupiter return) when his family moved into a new house to find that the previous owners had left a guitar behind. He founded Led Zeppelin in 1968, at his second Jupiter return)viii.

Space is limited here, so I have chosen just one chart to look at in a bit more detail – that of the writer Sir Arthur Conan Doyle, best known as the inventor of the fictional detective Sherlock Holmes.

Conan Doyle trained and practised as a doctor but, as you might expect from a chart with four planets and the Ascendant in Gemini and the Sun ruling the 3 rd, he was a writer at heart. He was also an avid reader, escaping into books as a child to ease the difficulties of his early home life and a father who, suffering from epilepsy and acute depression, succumbed to alcoholism and was eventually institutionalised, leaving the family in great hardship. Conan Doyle also suffered from depression all his life, exacerbated by the death of his first wife from tuberculosis and the death of his eldest son, Kingsley, from pneumonia.

We might find suggestions for depression in the Moon-Saturn-Mercury/Pluto T-square and perhaps also the 12th house planets, and indeed in the Gemini signature, reflecting the heavenly highs and earthbound lows of the mythic Twins. In addition, there is no water in the chart, suggesting perhaps that emotions may not be easily accessed or expressed – with air as the dominant element here (and Gemini the dominant sign), it is perhaps not surprising that he found an emotional outlet through writing, in a series of stories which seem to contain a strongly autobiographical element. How like a Gemini to write about themselves whilst deflecting attention by not actually writing about themselves!

Sherlock Holmes seems to me the perfect Sun-Uranus in Gemini and Moon-Saturn-Mercury/Pluto invention – urbane, detached, logical, frighteningly clever and matched in intellect only by his dark adversary, the evil Moriarty. In the stories, it is made clear that Holmes also suffers from periodic depression, in a state of euphoria when working on a case but falling into despair and loss of meaning when he is not, alleviated only by injections of opium and cocaine. Apart from Moriarty, he also has two other ‘twins’ – his brother Mycroft, a brilliant civil servant seven years his senior, and the affable and uncomplicated Dr. Watson, narrator of most of the stories. 125 years after the first Sherlock Holmes story appeared in print, he is the still the subject of a steady stream of re-workings, reinvented for each new generation.

Most of us will never write a blockbuster novel or a hit song, but we all have creative gifts within us which are truly and uniquely ours, sometimes growing out of the most difficult of circumstances but demonstrating the passion within us ‘to live beyond our death’, in whatever way we find meaningful. An understanding of our astrological pattern offers us permission to be ourselves, inviting us to view the chart in a way which celebrates its uniqueness, whatever it happens to contain. So the next time you catch yourself looking at your own chart and wishing it looked different, remember that there is potential for originality and brilliance in any and every placement.

I will leave you with two of my favourite quotes:

“Diamonds are nothing more than chunks of coal that stuck to their jobs.”