It is easy to forget, after 60 years of her reign, that when our Queen was born, no-one expected her to one day inherit the throne. In the early days of her childhood, Elizabeth enjoyed a carefree existence, expecting to stay in the shadow of her Uncle Edward and his future offspring. However, a momentous shift took place in 1936 when her uncle abdicated and passed his kingship onto his brother. A study of the planets’ positions at the time of the handover of power reveals a retrograde Pluto in the last degrees of Cancer, squaring Elizabeth’s natal Sun-Chiron conjunction, and also moving towards a trine with her natal Saturn in Scorpio on the Midheaven- signaling a fundamental transformation of her vocation. Anyone who has seen the recent film, ‘The King’s Speech’, will know well enough that George VI came to power reluctantly, albeit with a strong sense of duty to his family and to his nation, and struggled under the strain of his new position. The transiting Pluto square to Elizabeth’s Sun confirms the crisis that he faced, with his eldest daughter keenly aware of her father’s sense of vulnerability during this traumatic period. Another signal of an earth-shattering change to her father’s life and to her own identity at this time is transiting Uranus passing over her progressed Sun in the 3rd (note- Uranus transiting the 3rd: shocking revelations from an Uncle!). Her progressed Moon was about to enter the sign of Capricorn in the 12th house, which suggests a period of sober introversion, a time of preparing oneself for a new beginning. 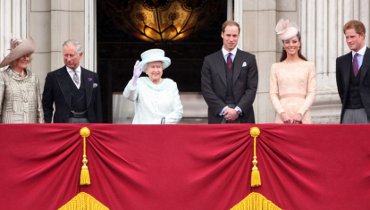 If we pause a moment to consider the way in which Elizabeth viewed her father, we see from her birth chart that she internalised his intense vulnerability and sensitivity, along with his conviction that he must strengthen the foundations of monarchy. This is evident in her Sun in Taurus in the 2nd house, conjunct Chiron and trine Neptune in the 7th. All of the significators for parents (Sun, Moon, MC, IC) are in fixed signs, and indeed, her father had a stellium of Scorpio planets in his chart with a Leo Midheaven, while her mother had a Leo Sun and a Scorpio Moon. This is a family with a great deal of strength, power and resourcefulness. Yet it seems that we do not celebrate these qualities in Elizabeth so much, as her unwavering dedication to the service of others, which is suggested by her North Node in Cancer in the 6th.

Her natal Saturn in the 9th, sitting right on the MC, describes her deeply religious conviction that to be Queen is to carry out her God-given duty. Nevertheless, the position is one of great responsibility and brings with it a feeling of isolation or alienation. The sign of Scorpio sums up the nature of this position- one of power- but also the difficulty inherent in such a role, which may call for the suppression of ones deepest emotions. Another look at the birth chart might suggest that her natural inclinations are not always in harmony with her position. The Capricorn Ascendant might suggest a rather sombre outlook at times, but beneath this is a woman with an extremely loving and generous nature, shown by; Venus in Pisces in the 1 st house (interesting to note both parents also had Venus in the 1st), Moon in Leo conjunct Neptune, a North Node in Cancer, Mars conjunct Jupiter and Sun trine Neptune. The Neptunian influences affect both luminaries, softening the ego and revealing empathy with the suffering of others. Venus is elevated in Pisces, which again suggests a great capacity to love humanity. 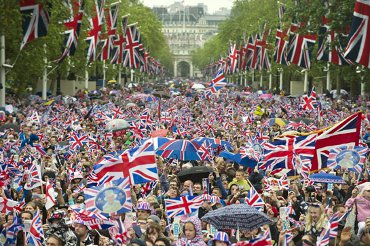 The death of a beloved father shakes anyone to the core, but to be expected to assume the greatest responsibility of one’s life at a time of mourning is a strange and unique experience. The date, 6th February 1952, marks Elizabeth’s coming of age- the start of her reign- but was surely one of the darkest days of her life as well. Let’s examine the transits and progressions for this day.

The most stark planetary position hits the observer straight away; the progressed Sun is exactly conjunct the IC, reflecting father’s withdrawal from life. (The deaths of the Queen Mother and Princess Margaret, occurring so close together in the Spring of 2002, parallel this astrological pattern, in that the progressed Moon conjuncts the IC, at the same as the progressed Sun conjuncts natal Pluto.)

A lightening bolt, in the form of retrograde transiting Uranus, is hitting natal Pluto (which rules the MC), uncovering her deepest fears and reflecting a sudden shift in power. Transiting Pluto is setting off her natal T-square, which involves a Mars-Jupiter conjunction in the 1st and Saturn on the Midheaven. The Pluto-Mars opposition shows the amount of energy required to undertake her new task, but the stress of this is all on the MC- the outward display that she must make to the public, as their new head of state. The progressed Moon is in the last phases of Cancer, moving towards the position that Pluto was in when it squared the Sun & Chiron back in 1936, but also heralding a period of glamour and prestige when it moves into the regal sign of Leo.

The Coronation is distinct from the day of succession as one of public celebration and display, and is separated in time by over a year. The chart for June 2nd 1953 shows the progressed Moon now firmly in Leo and back to its natal position. Pluto is moving forward over natal Neptune and stimulating the T-square for the final time in this transit period, suggesting an assimilation of the changes that have happened during the past year. Uranus is also moving forward towards a conjunction with the North Node and the Descendent, revealing an unfolding of her life path and further identification with the Cancerian urge to protect and care for others. The most striking transit is that of Chiron, which at 20° Capricorn conjuncts her Ascendant, this suggests that she felt extremely vulnerable, and possibly even anxious being ‘exposed’ to the nation, despite her outward composure.

As Elizabeth II approaches her third Saturn Return (due in 2014), she is in the process of sealing her place in history as a great Queen. However, her reign has not been without crisis. The year Elizabeth herself dubbed, ‘Annus Horribilis’ (1992) marked the beginning of a period of difficulty, culminating in 1997 with the death of Princess Diana. During 1992, Pluto was hovering near to natal Saturn in the 9th, stimulating the T-square once again; Uranus and Neptune were approaching the ASC from the 12th house, Saturn was approaching Mars in the 1st. As we move forward through the ‘90s, Pluto crosses Saturn on the MC, signalling the crises that threatened her public image. At the time of Diana’s death, Chiron was sitting opposite Elizabeth’s Sun-Chiron conjunction, but Pluto was also approaching a trine with natal Mercury in Aries and natal Moon in Leo, giving her the resources to communicate meaningfully with the nation and to thus avert any danger to her position.

So what is the legacy of our ‘Diamond’ Queen? Is it her unstinting dedication to her peoples? Is it the work she has done to strengthen and extend the Commonwealth? Her Mars conjunct Jupiter in Aquarius, speaks of her ability to channel her energy into humanitarian causes and to bring together people from around the globe. Her Taurean Sun indicates that she was born to be a source of stability, and certainly she continues to be so, for the nation and for all of the Commonwealth countries. The Jubilee celebrations this June, drawing thousands of people to the nation’s capital for a glimpse of the Queen, clearly reflected the esteem in which she is held by so many.