Undoubtedly we all have the Sign of Cancer in our natal chart; we all have a Moon and an IC. Regardless of being more or less a “Cancer type of person” we all have a family history, a past background, a mother image, a set of memories indexed to a subjective interpretation (our) that, throughout our lives induces us to behaviours, from which we get our source of comfort, security, and ultimately (even if it makes us suffer) what we are used to “eat”. Creatures of habits – That’s us! – behaving in a functional unawareness until life goes on confronting us with our memories, with our behavioural patterns, with our false protection mechanisms of poor nourishment.

The energy through which we, courageously, breakout for Life is marked by the sign that is on the cusp of the Ascendant (commonly referred to by Asc). This defines exactly the energies and circumstances that mark the instance when we relate to the world outside the mother’s womb. It sets my relation towards the world, how I was welcomed and my personal perception at the time of my incarnation. Throughout life, this is the energy I will make use of in order to filter reality, to assert myself, to build my self-image and to discover an immediate sense of Identity.

Someone who is born with Cancer rising has the Moon as its second skin (or even better, is skinless, “nude naked”, feeling his privacy is being watched by the entire world). This means the individual is highly influenced by his history and family circumstances, by the way he perceived his mother, by his emotions and sensibility. From birth, the Moon makes, in about 29 days (the time it takes to make a full turn around the Zodiac), aspect to all points of our natal chart. She imprints, memorizes, and reinforces response mechanism patterns to our surrounding environment, turning us into gigantic emotional data bases, which are nothing more than our perception (very personal and tiny) of reality. Without a conscious effort to understand the emotional dynamics that interfere with the way he perceives and acts with the world it becomes difficult, for the Cancer Asc, to develop a true sense of identity rather than being an extension of his mother (or his past). The person can become dominated by the mask, subject to the automatic, habitual responses and live life through the mother’s lens by repeating the absorbed pattern behaviour. The Cancer rising person has the purpose to develop a conscious contact with his inner life in everything he does, initiates and receives from the exterior. He needs to learn to understand and to discriminate which feelings command and impel him. Does he operate as a satellite of his family history, of his insecurities, of what he has “genetically” absorbed, influenced by his past shadow? Or, does he operate as someone emotionally mature, with the ability to integrate his memories and build a present that is richer and Life generating? If he stops living as a satellite of everything that contributes to the emotional void, but instead, develops a solid inner structure through which the Cancer Asc can draw the gift of nourishment and cohesion, then he can deal with the world and circumstances through Intuition instead of instinct. 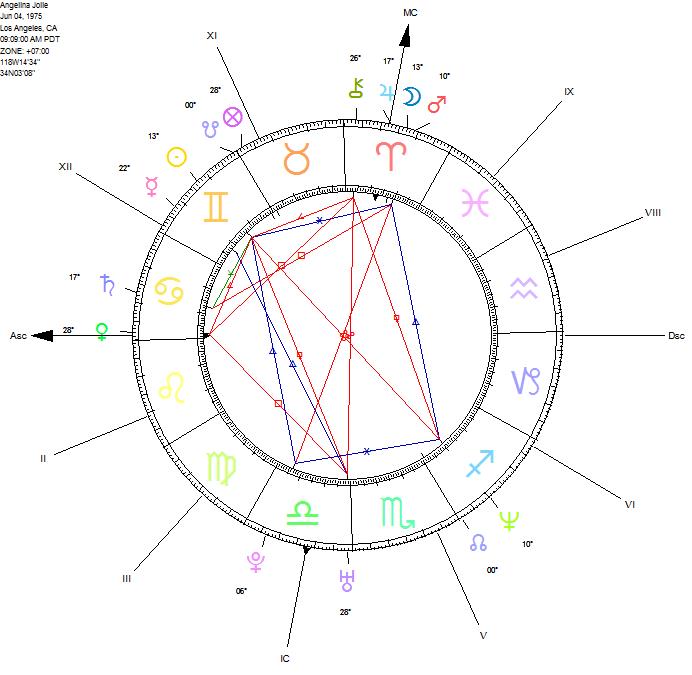 The Cancer influence on Angelina’s chart is obvious (with everything said before applying) defining a woman with a very feminine image with the help of Venus rising. Very quickly (because much more can be said about it) this chart also reveals a courageous woman with no fear to expose herself for what she believes (Moon, Mars and Jupiter in Aries conjunct MC). Nevertheless this also points to an impulsive and on the go orientation, a sense of survival instinct and a fear of destruction (opposite Pluto). Obviously this also enables her to enter and defend strong humanitarian causes, expose herself to the underground world and to identify herself with the misfits in society (Chiron’s positioning). A person with a strong, powerful and dynamic mind (mystic rectangle – fire / air) that can, nevertheless, be trapped in her assumptions and mental drawings.

The next chart shows the transits and progressions to her natal chart on the day of her double mastectomy. I have found some interesting points. On that day, transiting Moon was making some exact aspects to her natal planets and angles. 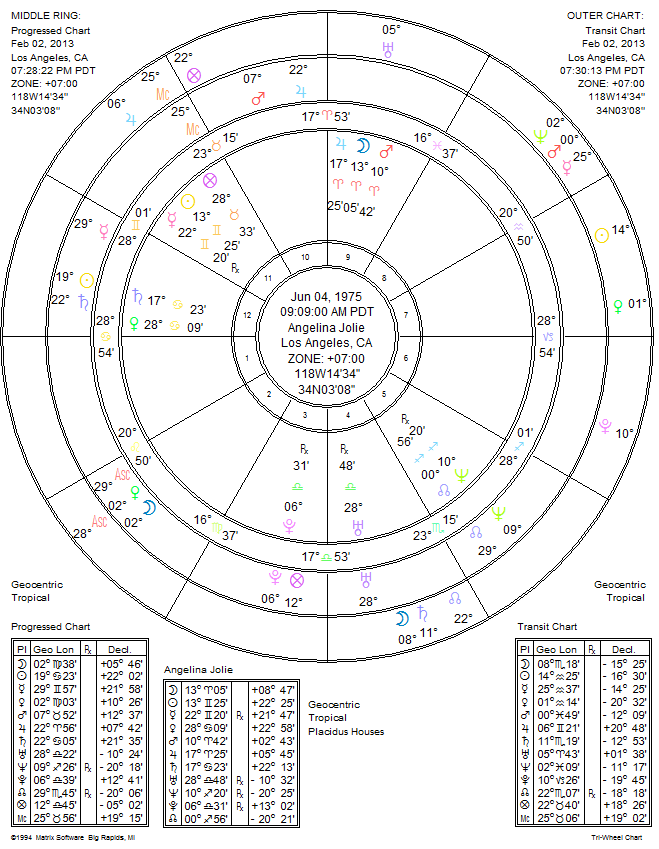 Other relevant celestial happenings contributing for the moment:

The Moon has a multiple meaning and impact in this chart:

For Angelina Jolie genetic studies pointed to 87% chance of breast cancer. But maybe it was the memories, the past, the biological karma, which determined her decision to have the procedure at the age of 37.

“My mother fought cancer during almost a decade and died at the age of 56. She lived long enough to know and to hold her first grandchildren. But my other children won’t ever have the chance to know her and to feel how lovely and sweet she was (…) I can say to my children they don’t need to face the fear of losing me to breast cancer.”

With so much lunar influence has the past haunted Angelina’s present and conditioned and influenced her conscious choices? It was definitely a journey to the past, to the memories, to her fears and insecurities. This was something that has confronted her with the fear of death, with the fear that hers would be her mother’s destiny. This has strongly influenced her radical decisions and brought her a (subjective) sense of rupture with the past as a (physical) way of freeing herself from her family history.

What fears are real in this story? The one’s from Angelina or the fears “manifested by her children”? Fear of biological karma, fear of the pre-determined genetic “destiny”? Activation of the survival mechanism? How much of the past Is Me?

Regardless personal or moral opinion each and every one of us might have (which will be irrelevant), this is undoubtedly a time for Angelina to confront the past and her roots. It’s a descent into the existential taboos and complexes.  To be healed, liberated from the past, from instinct… to gain emotional maturity… to psychologically cut the umbilical cord…

Needless to say, with natal Moon conjunct her MC, the social impact of this type of initiative will be tremendous.

The choices we make throughout life are always the right ones. They are what we need to develop consciousness.

Since early age, my education had an important catholic background, but when I arrived to the ag 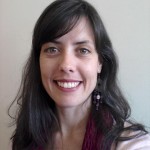 e of 15 this religious system was no longer adequate for me; too many questions with no fulfilling answers. Although I have always been interested in spirituality and in the interpretation of symbols, it took me 10 years since then to start studying astrology in a serious and structured way. I develop my astrological studies and practice based on the ancient wisdom principles because, in the way I see it, Astrology is an important tool that helps to find the path, the path to Unity. I started studying with the Faculty since 2011 (signed for the complete foundation course) and have just applied for the certificate exam.