An Opportunity for Healing – June/July 2013

During the last few years we have experienced turmoil and unrest with many unexpected and deep changes taking place in society and within our personal lives, courtesy of the on-going Uranus – Pluto Square providing a backdrop for unexpected transformation. Meanwhile the north and south nodes in Scorpio/Taurus are enabling focused direction for our future collective development.

Pluto entered Capricorn in 2008 setting the stage for the exposition of weakness and corruption within many institutions for the survival of society. This force intensified with the first of a series of seven Uranus – Pluto square aspects, commencing in 2012 and continuing through 2015. It is apparent that some of our structures, hierarchies, rules and regulations are breaking up and falling down around us, as we become increasingly aware of the rotten core at the nub of these areas. The abuse of wealth and power by our government and the senior levels of our central banks and media are being uncovered. This article is centred on events in London; however the fall-out has led to painful experiences for most of us not only on a global scale, but also individually leading to a general lack of faith and optimism for the future.

There is a glimmer of hope! Between 25th June and 19th July 2013 a grand trine aspect forms between 4 – 5 degrees in the water signs (exact on 17th July), this comprises of Jupiter (conjunct Mercury and Mars) in Cancer, Saturn (wide conjunct North Node) in Scorpio and Neptune (wide conjunct Chiron) retrograding in Pisces. This is a significant aspect pattern involving two social planets and one generational planet.  It highlights the opportunity we all have to continue to uncover hidden truths, to use the lessons from previous unpleasant or alarming situations and events while looking to the future and using our intuitive knowledge and inspiration to heal ourselves and others.  It is possible that some of us will experience a healing crises on some level, due to the depth of feeling involved in this configuration. The movement of these planets occur as follows: 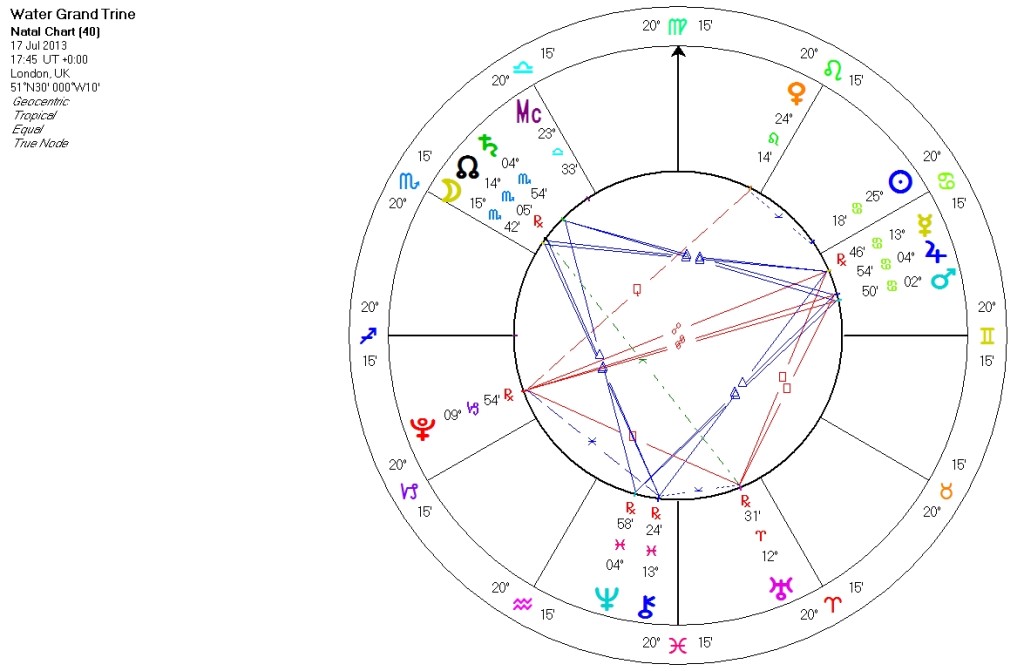 Neptune began his slow sojourn in his home sign of Pisces in 2012 and is not due to leave his domain until 2025. The energy of Neptune is slow, nebulous and difficult to grasp, and while he represents compassion, creative imagination, spirituality and the inclination to merge, he also symbolises the potential for illusion and disillusionment. The effects of this transit may not be experienced on a conscious level for a few more years as its energy is likely to take time to filter through to our consciousness.

Saturn’s entry into Scorpio last year has been quite an eye opener.  Companies, organisations and hierarchies that are no longer working or have been abusing their power for years, unacknowledged and unopposed, have been unearthed.  Many have experienced the cosmic scythe clearing the dead, rotting debris and superfluous beneath the surface. This has been a painful but cathartic experience and will cause ripples in the social fabric of our society for years to come.

The last time Saturn and Neptune formed a trine aspect it occurred in Gemini and Aquarius respectively between June 2001 and April 2002. The upcoming Saturn and Neptune trine in water first formed in October 2012, the 9 month long cycle will culminate in July this year.

This transit reflects our potential ability, on a global, social and individual level, to bring our dreams and ideals into manifest reality.  Alternatively, it is possible that older undeveloped aspirations from twelve or thirteen years ago may need to be reworked and refined during this period. Subjectively this may be a continuation of a dialogue between these planets – something which began in the intellectual and abstract realm (air) will be submerged in the depths of emotional experience (water). When Jupiter gets into the mix this imaginative creation may be expanded with energy, faith and positivity.

Jupiter enters Cancer on 26th June and will no doubt expand our beliefs, social and moral ideals and our ideas of protection, while increasing our urge to explore and experience new perceptions and situations.

Perhaps the social planets Jupiter and Saturn connecting with Neptune in a flowing aspect will harness Neptune’s drive towards the collective consciousness, thereby enabling us to process this energy on a more accessible and individual level. Hopefully we will become much more open and sensitive to the inner dimensions and non-physical realities, which in turn will help us to translate our dreams into reality.

The grand trine in water signs signifies an awakening to the essential fact that on some deep level we are all one through our connection on the physical, emotional and spiritual planes of existence. Our spiritual yearnings and development may be stirred and activated through different themes as represented by these three signs. Through Cancer our feelings and sense of belonging connected with home, family and nurturing will be stimulated; Scorpio may arouse our psychological need to delve deep, explore and shine a light on our dark internal recesses, while Pisces could awaken our compassion and longing to simultaneously transcend our earthly limitations and merge with everything within the cosmic womb.

If we take into account the purpose of the planets involved we get a fuller picture. Jupiter is concerned with religion, philosophy and the judicial system. Action oriented, this energy is expressed outwardly through faith, hope and optimism and broadening perspectives through experience. Saturn counteracts Jupiter’s potential to inflate and is geared towards responsibility, obligations and realism regarding structures, hard work and accountability. Alternatively, power and control issues along with self-defeating tendencies due to fear are possible. Neptune wants to transcend material aspirations through spiritual and creative endeavours, although if channelled incorrectly or supressed it could lead to deception, escapism and victim/saviour tendencies.

Any of these areas and expressions of energy may be developed on a larger scale within society’s current political, social, judicial and religious structures, thereby improving common values and belief systems. It is possible that we see more significant individuals recognised for their moral character alongside improved changes within the hierarchies that manage our infrastructures and legal system. This latter may particularly impact the numerous cases of abuse of power that we have seen in the news and especially those containing sexual abuse.

At the time of writing, Pluto is transiting at 11 degrees Capricorn and happens to be activating the point when Saturn conjunct Neptune began a new cycle in 1989 at 11 degrees of this sign. As we know, Pluto stationed retrograde on 13th April at this degree point and will return to this point in December in direction motion. The connection of these major transits suggests that a review and plan of action (Pluto Rx) of our on-going experiences related to the Uranus-Pluto square is required at this point in our journey. We may need to revisit something or someone from 1989 so that we can finally let go of a particular situation. Meanwhile the water trine signals the beginning of potential healing on various levels.  We have the opportunity to accelerate our evolution by restructuring our material reality of responsibility, commitment and obligations (Saturn) and re-weaving it with our moral reality of belief and meaning (Jupiter), together with our spiritual reality of ideals and compassion (Neptune).

If we are seriously committed to following our bliss, this planetary combination has the power to make our dreams, visions and fantasies come true, as long as we act moderately, sensibly and compassionately. Sometimes the grass is greener on the other side…

Lorna Blake is an advanced Faculty student, currently working towards gaining the Diploma 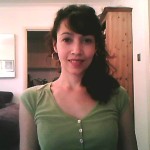 qualification while building an astrological practice in London.