The recent addition of a new optional half-module – The Astrology of the Family – to the Faculty’s course material has prompted me to look once again at my own family’s charts.

One of the most important moments for me as a student of astrology was when I realised that no matter how familiar I was with my own chart, no matter how hard I studied its placements and configurations, my knowledge would not be complete unless I could also understand the astrology of the family to which I belong.  Once I had started to study the charts of my brother, parents, grandparents, aunts and uncles, my own chart began to take on a truly three-dimensional quality – it took me beyond the idea of the chart as just my own personal territory, a reflection of my will and intention, to reveal its role as a container of family legacy and inheritance, and how this as shaped my life.  Indeed, as many great astrologers have pointed out – Liz Greene[1], Erin Sullivan[2] and Brian Clark[3], to name just three – the influence of the ancestors is arguably so profound that individual will and intention can never be divorced from the collective will of the family. 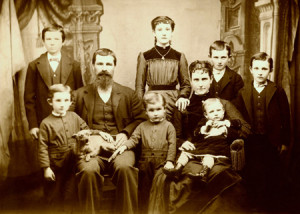 My chart is my own, of course – my Sun is my Sun, it isn’t my father, any more than my Moon is my mother or Mercury my brother in any concrete sense.  And yet, in the magical way which astrology has of describing both inner and outer circumstances, self and other, in one unbroken image, my Sun reflects more than just the nature of the bond between me and my father, my experience of him – it also describes something very real about his life story, as well as holding an important aspect of my family’s collective myth of ‘father’ which I have inherited. It is the same with my Moon, which reflects not only the dynamic between me and my mother, but also the thread of a story which reflects something of her experience and that of her mother, and indeed a web of images around caretaking and safety which have worked their way through the family line.  Whether this astrological inheritance is fate or choice, and indeed whether these on some level amount to the same thing, I do not know.  But in examining my chart, I see it is full of family ghosts, and the more I explore my ancestry the more aware I am of the idea that my chart is not a separate thing but part of a collection of charts, all linked by common astrological signatures.

I will give you an example of this.  I have the Moon in Cancer square to Jupiter, and this is echoed in many of the charts on my mother’s side of the family.  My mother (Cancer rising, Moon square Jupiter on the Descendant) was born in Canada to immigrant parents who had left London searching for a better life abroad.  They followed in the footsteps of great uncle Harry, who had escaped an unhappy marriage to start his life over again in Canada.  Her brothers Fred (Moon square Jupiter) and Norman (Moon conjunct Jupiter) then left Canada as adults to make a home in the USA, whilst third brother Bob (Moon in Cancer sextile Jupiter, Sun-Venus-Mars in Sagittarius) came back to the UK before settling in Spain.  My mother followed Bob back to London, married my father, and they decided to escape post-war rationing and austerity and find a better life in Montreal, returning to London five years later.  My brother (Moon/Asc opposite Jupiter/Desc in Sagittarius) spent years longing to emigrate to Canada or the USA.  I think my nephew (Jupiter square Sun this time) would have jumped at the chance.

It would seem that generations of Schultzes and Taylors have been ricocheting across the Atlantic for decades, either literally or in their imaginations, in search of freedom and escape from the ordinariness of life ‘back home’, wherever ‘back home’ happens to be at any given time.  Perhaps it is no wonder that they all chose Canada, which itself has a Sun-Moon conjunction in Cancer on the MC trine Jupiter in Pisces, the USA (Sagittarius rising and Sun conjunct Jupiter in Cancer) and Spain (Moon in Sagittarius ruled by Jupiter conjunct the Ascendant).  It is probably also no wonder that my mother (whose Jupiter is in Capricorn on the Descendant) chose my father (Sagittarius Descendant and a Capricorn Stellium comprising Jupiter-Venus-Mercury which is conjunct my mother’s Jupiter-Descendant and square her Moon).

My own Sagittarius Descendant and Moon-Jupiter square emerged in my choice of partner too – he has the Moon opposite Jupiter in early Capricorn and Mars in late Sagittarius, and spent his childhood moving from country to country because his father was in the army, living in Libya, Egypt, Malaya and Singapore before choosing as an adult to live for a time in the USA.  Personally, in terms of moving home, I only made it as far as Manchester, but I recognise only too well the sense of inner restlessness which is bound up in Moon-Jupiter – the belief that life offers endless possibilities, that your circumstances can always be improved, and the constant desire to pack up the caravan and move on.

Everywhere you look in a chart, the experiences of previous generations are only just below the surface.  I certainly don’t have to dig very far down to find them in my own.  I have Mercury-Venus conjunct the Ascendant in the 12th square Mars-Pluto in the 3rd – my mother was in hospital during the weeks prior to my birth being monitored for hypertension, exacerbated by the volatile presence of my four year old brother who no doubt already sensed a rival on the horizon (or was it me who sensed that!).  During her hospital retreat, she read endless romantic novels as a way of taking her mind off the potential threat of complications at the birth, and I was named after the heroine of one of the stories she was reading, a woman who apparently talked her way diplomatically out of all manner of taxing situations.  With my brother (Pluto in the 3rd square the Moon on the Ascendant), she had been in hospital with septicaemia.

I am sure you can find a whole range of interesting examples from your own experience – all you need is the birth data of your closest family members.  Indeed, even just looking at your own chart is enough to begin this fascinating journey.  And I can certainly recommend The Astrology of the Family module as an inspiring but also safe context in which to do this – the depth of the material, and the journey one takes with it, is astounding.

Astrology is uniquely placed to provide a framework for understanding the dynamics of any group of people, and in particular a group which is connected intimately and emotionally, and over many generations – the myths or primary motifs of a particular family group will show themselves in the arrangement of planetary aspects and sign or house placements which weave down through the generations, subtly altered as each generation wrestles with the issues at hand and adds their own chapter to these family stories.  Coiled in the DNA, amongst the genes for red hair or blue eyes, is the family’s signature planets, signs and houses, its propensity towards an unaspected Sun or a prominent Mars, its own tutelary deities living out their cosmic drama through the device of the family, through plots and sub-plots which rise and then fall away as the dynamics are lived out, worked through, suppressed, heroically revisited or laid to rest.

We might say that the chart does not belong to us, we belong to the chart – each is a selected moment, bound to other moments across time through common signatures and embodied in the people of an integrated unit such as a family.  In this way, the ongoing drama of the skies is made manifest through the intricate weave of human experience.  As the saying goes, you can choose your friends, but you can’t choose your family – or perhaps your family chooses you.

‘In every conceivable manner, the family is our link to our past, bridge to our future’.  Alex Haley, author

‘No matter how many communes anybody invents, the family always creeps back’. Margaret Mead, anthropologist

The Astrology of the Family is written by Brian Clark and Glennys Lawton and is now available as an optional half-module on the Faculty’s Diploma Course.