Having a broad awareness of Astrology since my twenties I have spent the last thirty odd years (and they have been very odd at times!) being totally fed up that I have a Moon-Saturn opposition combining with Neptune conjunct Venus to form what I always considered to be a ‘nasty little T-Square’, the bane of my life! 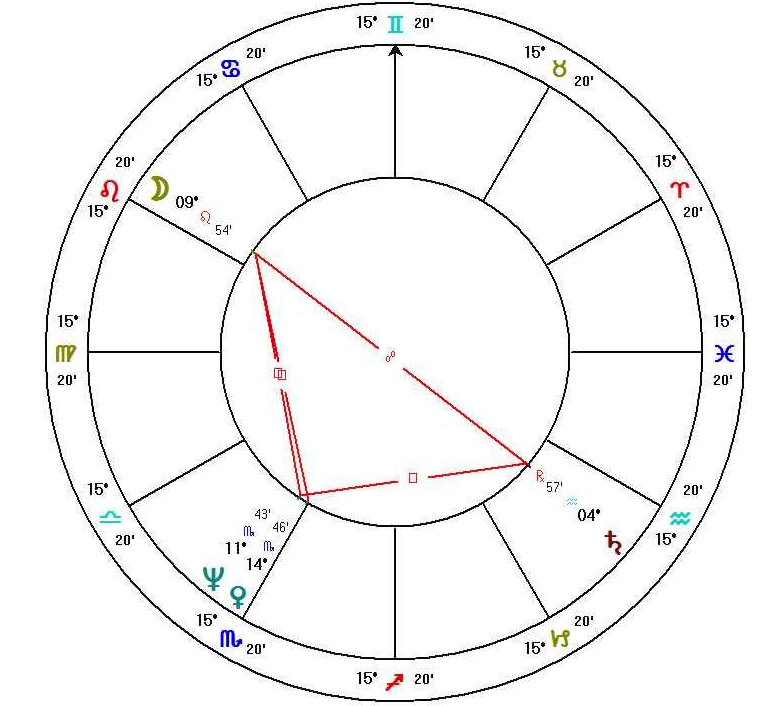 Neptune conjunct Venus in Scorpio in the second house I can live with. The deep sensitivity and creativeness, not to mention the empathetic approach to others more than makes up for the confusion over money and the inevitable self-worth issues represented by this aspect. However when you challenge this with a need to belong and frequently shifting moods (a square from the Moon in the 11th house), then I hardly need state that my earlier years were characterised by changing relationships, a feeling of never being accepted or belonging and whole lot of confusion as to why that was the case!

However, it was Saturn in my 5th House that I saw as the real icing on the cake! Forming a square to the Neptune/Venus Conjunction and at the same time opposing my Moon, I felt I must have been really bad in a past life! The Moon/Saturn relationship for me manifested as the loss of both my parents by the age of 18 and a sense of social rejection resulting from being alone at such a young age. From this I developed an almost desperate need to belong yet at the same time experienced the opposing fear of not trusting anyone and this coupled with self worth issues (Neptune/Venus conjunction in Second House) made for some considerable inner tension and at times unbearable confusion. Being young and seeing my Birth Chart as fated; fixed; something imposed on me; I struggled to understand what it was all about.

As the years passed I began to mature and become aware of the inner strength and resilience I had developed from facing the earlier challenges. I became clearer about what I needed and who I was and found that this understanding and boundary setting made all the difference. I began to gain the acceptance I craved through accepting myself more than through expecting it from others, yet as I accepted myself more so others also provided the energy of belonging that I had missed in my youth.

Through the study of Astrology I began to see my T-Square differently and understand that the Saturn energy I had so long resented was a symbol of inner strength that I had been unable to locate or integrate in my youth. Ironically the Saturnine energy, which for me had symbolised the blockages in early life (opposition Moon), was the same energy which when consciously harnessed allowed strong and mature expression of my emotional self (Moon).

“…oppositions describe an inner ‘split’ or conflict which we are normally unable to recognise consciously or to integrate. In order to reduce the level of tension caused by this inner conflict, we may identify with one side only, which means that we will meet the other side in the world or in other people, rather than as an aspect of our own personalities.”

It was challenging (as you would expect oppositions and squares to be) yet as my self-awareness and confidence grew I learned slowly to take the constructive Saturn energy and combine it with the emotional connection to others (Moon in 11th). The confusion and idealism represented by the Neptune/Venus square created considerable inner tension between balancing my own needs and ideals with that of others. Yet as I adjusted my perceptions and expectations of others and of myself I found that Venus love and the empathy of Neptune began to flow into my work with others and into my relationships. The grounding realism of Saturn once tapped enabled me to not lose myself in such encounters and to set boundaries for myself in order to clarify what would previously have been overwhelming and confusing (Neptune). As a result I came to understand the gift of Saturn and the joy of accepting and embracing the wisdom inherent in my T-Square and all that it represents in my journey to self.

I used to fear reading the standard astrological definitions about transits in case they were ‘bad’. Now I understand that I am not doomed to experience disasters or negative situations fated by the roll of the planetary dice. No. I am the master of my fate and my chart is the map which guides me. It is a joy to realise Saturn is no longer my nemesis. It is the icing on the cake, a symbolic gift of integrity and perseverance which has allowed me to move from past to future with purpose and self-responsibility. And so as I approach a Saturn-Neptune conjunction transit due in February 2013 I realise that where once I would have been fearful, I am now excited about the new lessons to be learned which Saturn represents.

I leave you with a quote from the Faculty Certificate Module 1:-

“Saturn… reminds us that worthwhile and enduring achievements are likely to require hard work and dedication. He guides us to assume responsibilities which will encourage our sense of inner authority and he compels us to stay true to our commitments – whatever it takes.”

Leslee lives in the beautiful Staffordshire countryside with her husband and 4 cats. She has worked in various office and practice manager roles yet always maintained a passion for working with symbolic systems of self-awareness. A Tarot Card reader for many years, she is now currently a Reiki and Emotional Freedom Technique practitioner as well as writing her first book. Leslee says her first love was Astrology and because of her passion for the subject she is now busy studying the Faculty Certificate Course.