A Snapshot of the Current Outer Planets Transits by Rod Chang
Saturn – The Icing On The Cake by Leslee Griffiths
September 6, 2012 In: Writing Corner No Comment

We live in a galaxy which is around one hundred thousand light years across and is slowly rotating. The stars in its spiral arms orbit around the galactic centre about once every several hundred million years. You could say that our solar system at around thirty thousand light years from the galactic centre in the inner edge of one of those spirals is in the galactic suburbs. Stars are so far away they only appear as pinpoints of light from our subjective perspective of the expanding universe from our own corner of the galaxy. So what story does the tapestry of visible stars tell us over the coming months?

The Great Bear, the Plough, the Big Dipper, by whichever name you know the constellation of Ursa Major it can be seen in the northern skies in September directly below the pole star in its counterpart constellation Ursa Minor. Nearby Cassiopeia begins to appear to topple over as she turn towards the west turning from a distinctive 'W' shape into an 'M' clinging on to her throne in punishment for her vanity so say the Ancient Greeks. Jupiter sits in between the horns of the constellation Taurus throughout the month and Venus far outshines Jupiter as the morning star in the east.

The 7th and 8th of the month and Jupiter can be seen in the east near the last quarter moon and on the 12th Venus meets the moon near dawn. The 16th sees the new moon in the sign (not constellation) of Virgo and the full moon falls on the 30th. The 22 nd September is the Autumn Equinox as the sun rises due east and sets due west. Mid-September finds the star Deneb in the constellation of Cygnus due south at 21:00 BST, Cygnus has been found to be the home of a 'Tatooine like' planetary system named Kepler-47. This system contains 2 planetary bodies orbiting a pair of stars (binary). For those sci-fi fans out there if there was a bright centre to the universe this isn't the planet that's farthest from it however you could stand on one of these planets and truly see two rising Suns! See this BBC news article: http://www.bbc.co.uk/news/science-environment-19401891

October and Jupiter is 'burning the candle at both ends' staying up all night to jubilantly shine. Venus is still visible in the morning in the east and on the 12th can be seen close to the balsamic moon. The month's new moon falls on the 15th and the 20th and 21st plays host to the annual Orionid stream of meteors in the eastern sky left by the debris of Halley's comet which is famously visible from Earth every 75-76 years and next due to pass in mid-2061. The constellation of Pisces is visible in the south depicting Aphrodite and Eros transformed into fishes to escape the monster Typhoon, joined by a thread so as not to be separated in the murky depths. And the 29th is October's full moon known as the harvest moon which in the days of manual harvesting shone extra light onto the grateful harvesters as the evenings drew in in the early autumn.

November and the darkness increases giving more sky watching time as the parade of Taurus, Gemini and Orion drift across the eastern sky. Jupiter is still dominating the night skies and Venus is rising just before dawn. The new Moon on the 13th is a total Solar Eclipse at 22 degrees Scorpio in the tropical zodiac. The solar eclipse falls under the 15 North Saros Series bringing with it a sense of joy and good news (cross reference - Predictive Astrology, The Eagle and the Lark - Bernadette Brady p329).

The 16th to the 18th sees another meteor shower with the Leonid stream coming from the head of Leo's lion in the east with the 17th being the best viewing night as the crescent moon sets at 20:00 GMT reducing any light interference. The full moon on the 28th is a penumbral eclipse or Lunar Appulse where the moon falls in the shadow of the earth's penumbra with the effect of slightly dimming the face of the moon. See the image below for a visual representation. 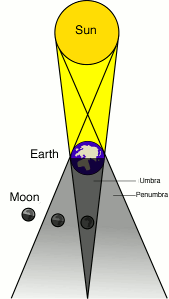 Image: The central Moon of the three pictured is in the Earth's Penumbra and so is a Lunar Appulse or Penumbral Eclipse.

December and Jupiter is now due south at 22:00GMT and Saturn puts in his first appearance for some time rising in the east just before dawn and as December progresses Venus becomes lost in the glow of the rising Sun.

Orion is still high in the southern sky with Gemini above to its left and Jupiter sitting above to its right again in between the horns of the Taurean bull. Also, on a clear night, just to the right of Jupiter on the shoulders of Taurus you will be able to see the seven sisters Pleiades cluster of stars. The 21st is the winter solstice at 11:11 GMT promising longer days and the full moon on the 28th is due south at midnight between the glittering stars of Orion and Gemini.

If you're someone who looks up with wonder at the universe around us at the magic of the heavens then this is a brief guide to the rest of 2012. I often imagine the billions of people who have gazed in awe at the stars for millennia and think of those who have sought to explore and understand their nature. And so, inspired by Stephen Hawking who as I write is taking centre stage in the opening ceremony of the London 2012 Paralympics I'll leave you to contemplate his closing statement published in his literary masterpiece 'A Brief History of Time':-

'… if we do discover a complete theory [of the nature of the universe], it should in time be understandable in broad principle by everyone, not just a few scientists. Then we shall all, philosophers, scientists and just ordinary people, be able to take part in the discussion of the question of why it is that we and the universe exist. If we find the answer to that, it would be the ultimate triumph of human reason - for then we would know the mind of God.' - Stephen Hawking

Tim Metcalfe is a Certificate holder and Faculty student. He has also been the Faculty's IT Manager. His area of interest is astronomy.